The future of mobility is a complex subject, so for the launch of its autonomous production vehicle, Cruise Origin, Cruise turned to museum-style installations to introduce press and employees to the self-driving, all-electric vehicle. The event needed to illustrate that Cruise Origin is not a concept vehicle (it’s ready for production), and that it’s going to change the world for the better. The event took place Jan. 21 at the SVN West in San Francisco—Cruise Origin’s test market, and where the brand is headquartered.

When attendees arrived, they were immediately immersed in key insights and talking points about the Cruise Origin, developed in partnership with Cruise, GM and Honda, and autonomous driving in general. Three installations in the space provided visual representations of major issues with traditional transportation: dangerous roads, polluted cities and time wasted driving. Each build was designed to provide context—the why—to attendees.

Since communities are still leery about the safety of autonomous vehicles, one of the installations focused on facts surrounding traditional transportation safety. Inside a larger-than-life marble run, a gray marble was released every 15 seconds to travel down the complex track, symbolizing the number of accident injuries that are incurred in human-driven modes of transportation each day. Every 15 minutes, a red marble was released to symbolize a fatality.

In a “Cigarette City” installation, the brand explained how simply breathing in San Francisco equates to smoking 365 cigarettes per year due to air pollution from traditional gasoline-powered, single-occupancy vehicles. The point was illustrated with smoke effects in a white model city of San Francisco encased in Plexiglass that sat atop a field of vertical cigarettes.

And in “Time Shredder,” the brand demonstrated the amount of time wasted in traffic by literally shredding individual calendar days. Each day of the year featured a photo of an activity people could have been doing instead of sitting in traffic. 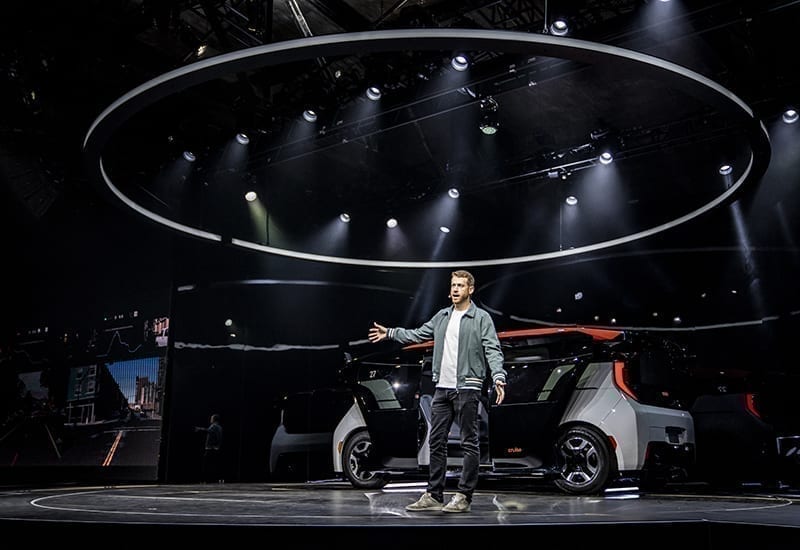 A main-stage reveal featured messages from executives and time for attendees to hop inside the vehicle.

“We know that Cruise Origin is going to offer a safer, better, more affordable transportation experience than traditional ride-sharing and car ownership, and what we wanted to make sure of is that people understood that this is not a concept car, this is not something we’re potentially taking to CES and showing as a ‘someday’ car, but that it’s actually going to be assembled by GM in the U.S. It warrants so much more than the typical reveal,” says Michal Zeituni, brand manager-community initiatives, at Cruise. “It’s about bringing to life this larger story to get people to buy into our mission and our goals of fixing the status quo with a better experience that’s self-driving, all-electric and shared.”

After they spent time with the exhibits, attendees experienced a main-stage reveal of the vehicle with messages from executives and time at the end to walk up and hop inside the vehicle. The launch event, with more than 1,000 people in attendance, garnered 8.5 million social impressions and 365 primary print stories. Agency: Jack Morton Worldwide.

The post Cruise Takes Cues from the Museum Space for its Origin Launch Event appeared first on Event Marketer.