Before Jennifer Lopez and Shakira shook the house down with their halftime performance and before the Kansas City Chiefs defeated the San Francisco 49ers, a plethora of Fortune 1000 brands took over Miami to score points with football fans in the week prior to the big game.

More from the Super Bowl Archives:

Best Buy returned to Super Bowl LIVE with its Tech Zone activation designed to engage fans in high-tech home entertainment products that can enhance the game-day experience. Housed in a repurposed shipping container, the activation featured a living room showcase, a gaming experience and a fitness room, all equipped with products consumers can buy through Best Buy—in fact, the brand also promoted its seamless installation and support services. Before exiting, attendees could pose in front of two Instagrammable Best Buy-enhanced rooms to snap photos to share on social media. Agency: GMR Marketing.

Bud has always had a strong Super Bowl presence but the brand took its strategy to the next level this year, delivering one of the biggest integrated marketing and influencer-focused programs in AB InBev’s history. Ahead of the big game, Bud invited 200 “kings of culture” from 20 different countries, each boasting more than one million social followers, to stay at the “BudX Hotel” in South Beach for three days before the matchup. The brand takeover encompassed a 250-room hotel property (The Nautilus by Arlo) and waterfront mansion where influencers were treated to concerts headlined by Halsey, Black Eyed Peas, Diplo and others; pool parties; influencer content studios; Instagrammable moments; karaoke and other curated events. The campaign was centered on Budweiser’s BUDX platform, which features curated events across the world that bring together the brand’s global creator community and influencer talent.

Also worth a mention: Budweiser’s selfie-friendly bottle labels. The “SelfieBud” special-edition labels, unveiled at the BudX Hotel, were printed backwards so when someone shared a selfie with their beverage, the words on the bottle were displayed in the proper direction. Agencies: Octagon (experiential, activation management); Deutsch (content strategy); WINK (concept, production); Virtue (influencer management). 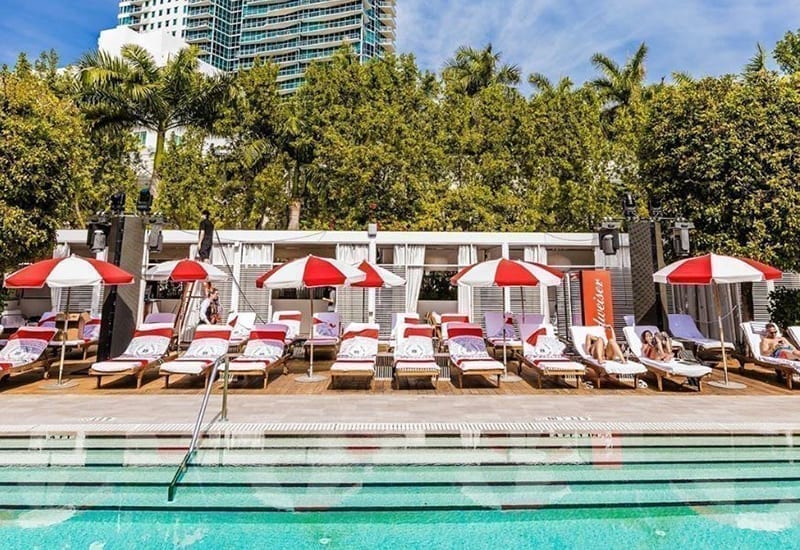 Home is where the heart is, and for most Americans, it’s also where the Super Bowl is… on TV. It’s a fact not lost on Lowe’s, which replaced Hyundai this year as the 2020 presenting sponsor of the NFL’s Super Bowl Experience. As the home improvement partner of the NFL, Lowe’s debuted the Lowe’s Hometown installation, an “idyllic NFL community” of mini installations representing all 32 NFL teams. The sponsorship supports Lowe’s larger “Bring it Home” campaign, through which it encourages fans to create the ultimate viewing spot for the big game with new deck lights, updated color schemes, grills and game-ready coolers.

Each of the custom-built installations, which featured logos and stylings representing unique characteristic of each team and home city, were built using tools and supplies sold at Lowe’s from brands including the Chamberlain, Kobalt, Valspar, Trex, Leggett & Platt and Scott’s Miracle-Gro brands. Among the installations: A “Pitmaster Place” for the Kansas City Chiefs featuring a wolf den tucked into a rocky cliffside and a smoke pit; and a “Forty-Nine Shaft” for the San Francisco 49ers, featuring a wooden entryway to a gold mine cut into a mountainous façade.

The Bring It Home campaign extends to social and digital to out-of-home advertising as well as in-store activations in Miami. In addition, Lowe’s partnered with Rebuilding Together and 200 volunteers from location organizations to provide critical home repairs for nine families in Miami’s West Coconut Grove neighborhood. Agency: 160over90.

Microsoft turned heads in Miami with two Piaggio Ape 50s, quirky three-wheeled vehicles, that housed its Outrun Ordinary game. The vehicles were outfitted to deliver a tech-driven experience that traveled around various parts of Miami, surprising and delighting fans with “Anything But Ordinary” prizes. The face of the experience was NFL player Von Miller, who was represented by a custom mascot that interacted with fans. As an added bonus, Von Miller himself also showed up and got to meet his own mascot. Random fans were selected to participate in an additional engagement to win prizes of varying levels. Agency: Wasserman.

As presenting sponsor of the Walter Payton NFL Man of the Year Award during the NFL Honors, Nationwide offered a multi-day activation within an exclusive space on the NFL Honors Red Carpet. The brand also hosted the final Huddle in the NFL’s year-long “Huddle for 100” campaign at a local Boys & Girls Club, where all 32 Man of the Year nominees, NFL Commissioner Roger Goodell, Nationwide leaders and more than 100 kids participated in skills drills, painted a commemorative wall mural and worked to improve the play space. Agency: Wasserman. 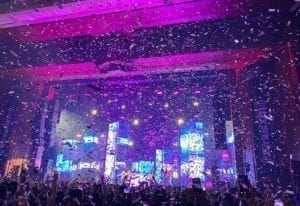 Pandora offered an exclusive, two-night concert series presented by SiriusXM featuring performances by the Chainsmokers, Lizzo and Harry Styles at the legendary Fillmore Miami Beach. In addition to performances, fans could participate in activations provided by 14 additional sponsors. Among them was the Doritos Cinematic Video Booth experience that instantly created commercial-quality “hype videos” for attendees, which could be shared immediately (see it in action below). The activation was designed to complement the overall Doritos campaign featuring Sam Elliot and Lil Nas X in a reimagined version of the “Old Town Road” music video. Agencies: Wasserman; EventsTag (Doritos video booth). 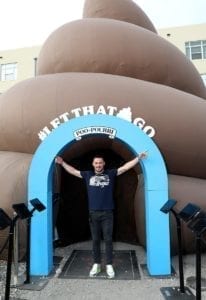 The “uncomfortable” experiences trend is still going strong, as personal care brands continue to leverage events to break down stigmas. A trailblazer among them is Poo-Pourri, a “before-you-go” toilet spray brand that has been encouraging consumers to “let that sh*t go” for over a decade. The brand leveraged Super Bowl to activate its Giant Poo experience, which is traveling the nation on a 22-stop tour. The activation centerpiece? A…well… giant poo. A 30-foot-tall inflatable one, that is.

Inside the pop-up (or is it poop-up?) structure, located at Super Fan Fest, consumers could view projection-mapped content, enjoy tailgating activities, check out the brand’s new Flushdown scent (see what they did there?), hear live music, catch surprise celebrity appearances and attend fan meet-and-greets with some all-stars that Poo-Pourri considers “the sh*t,” like Brett Farve, Ric Flair and Charissa Thompson.

At the heart of the Giant Poo activation, however, was a three-minute, multisensory bathroom experience. Instead of literally letting that shit go, consumers were invited to let go of toxic thoughts that “constipate our minds” and weigh us down. How it worked: Participants sat down in one of eight replica bathroom stalls equipped with an iPad as the brand’s well-known spokesperson, Bethany, digitally guided them through the experience (she also showed up in person over the weekend to help drive buzz). After writing down some negative thoughts on the iPad, partakers were invited to pull a physical flush chain, then felt a puff of air on the back of their necks as the toilet seat vibrated and Bethany offered a few more words of wisdom. A flushing experience. Sad you missed out? Poo-Pourri also created a digital version of the experience, which you can view here. Agencies: Pneuhaus (inflatable design); Flight School (animation); Omnispace 360 (projection technology); Ben Turk Consulting (strategic tour consulting).

The consumer goods behemoth activated the Fumble Frenzy at the Super Bowl Experience, which invited fans to try to recover as many fumbles as they could (in an experience reminiscent of the game “Hungry Hungry Hippos”) in order to win a $100 Amazon gift card. The activation featured a cheer squad, on-the-ground interviews of players and commentary from celebrity sports announcers Alex Anthony, Ted Sobel and Paul Olden. Fans also walked away with samples from P&G brands including Old Spice, Gillette, Head & Shoulders, Tide and Olay. For breastfeeding moms and parents, P&G’s Pampers brand parked a branded Airstream on-site (behind the activation) to provide a space to nurse and change their children. Agency: Allied Experiential. 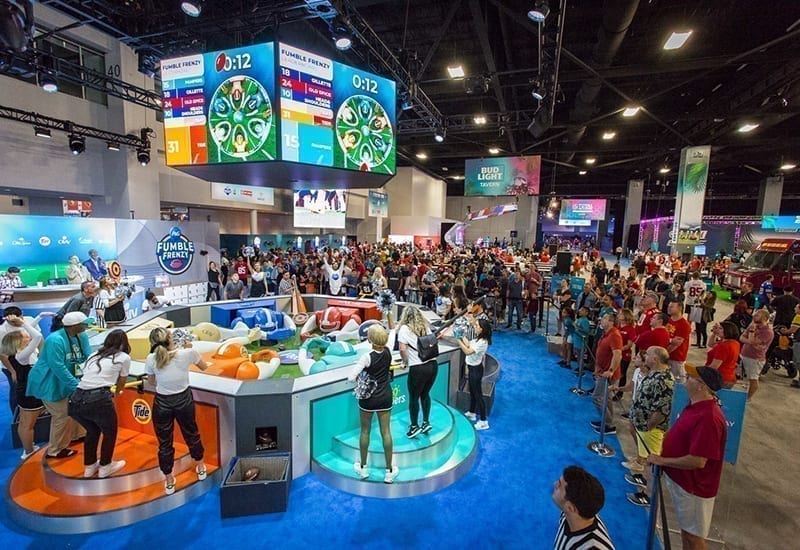 Sleep Number returned as the official sleep and wellness partner of the NFL with a few of its favorite engagements and an educational experience that illustrated the importance of quality sleep for both athletes and everyday people, and highlighted the brand’s 360 smart bed. The footprint featured the same design elements and some engagements from the brand’s 2019 Super Bowl program, but with a few new touches. Like the Zen Zone, where attendees slipped on sleep masks embedded with sensors and competed to calm their minds by moving a football with their “brain score.”

There were also two 12-foot-tall branded football helmet domes where attendees took a “ride” on a 360 smart bed while viewing an overhead LED screen that walked them through the product’s features while the bed responded. In addition, fans could virtually experience the team bedroom of their dreams featuring their favorite squad’s logos and colors, and play a Sleep Number-branded version of Plinko (everyone’s favorite “The Price is Right” game). To boot, the space was leveraged to record podcasts and a conversation with Katie Couric about the rise of sleep deprivation in students. Agencies: Centerpoint Marketing (design, production, installation); Clamor (Zen Zone concept); Fuse Animation (digital content); LMG (lighting, mattress ride and dream bedroom concept). 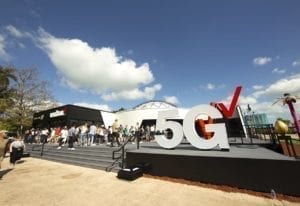 As presenting sponsor of the Super Bowl LIVE experience, Verizon once again immersed fans in technology that allows it to deliver next-generation connectivity and experiences. This year, the focus was again on 5G, and how that will impact the game-viewing experience in-stadium and at home.

Underneath a striking dome structure resembling a miniature sports stadium in Bayfront Park in downtown Miami, fans experienced 360-degree streamed 8K content collected from the Pro Bowl, and made possible by Verizon’s 5G Ultra Wideband technology, which was installed at 17 NFL stadiums throughout the season. In addition to experiencing streaming with zero-latency thanks to 5G, fans experienced next-gen game views. Through its partnership with ESPN, Verizon captured immersive angles captured with a small, light-weight camera mounted, in some instances, below ESPN’s own cameras.

Fans were also immersed in the stadium of the future. Each seat was equipped with a 5G device that allowed fans to point it at a player in front of them in the content and immediately call up stats and other information. They were also able to interact with the broadcast, choose from their seat which camera angle they wanted to see, and watch coverage like volumetric replays—all things you can’t do without the fast speed of Verizon 5G Ultra Wideband.

“People don’t get that 3G to 4G is not 4G to 5G—5G is 10X,” says Chris Weil, chairman and ceo, Momentum, which handled Verizon’s experiential activation. “That’s how much faster it is, and if you think about that from a business standpoint, all of the things that everybody talks about in the future, whether it’s self-driving cars or surgeries from afar, none of that is possible without zero latency, and that’s what this network is. And so to be a part of the launching of that is really exciting and fun for us.” Agencies: Momentum (lead); Tool of North America (production/AR content); Glow NYC (a/v); Flight School (live stream); Gronda Productions (signage); The Hype! Agency (staffing).

The post How Brands Activated for Football Fans at Super Bowl LIV in Miami appeared first on Event Marketer.