The live event space is on pause, but the stay-at-home economy is opening up opportunities for brands to expand their portfolios and their reach. In March, Seattle-based Jones Soda made its move into esports by signing on as title sponsor for the Last Chance Qualifier competition in The Race All-Star Series. The five-week sim racing virtual championship kicked off on March 21, with events streaming Saturdays at 1 p.m. Eastern through April 11 on Twitch and YouTube.

The races take place on virtual versions of automotive circuits around the world (like the Indianapolis Motor Speedway), and each race features real-world motorsports stars racing alongside professional gamers—remotely, of course. Winners share a $10,000 pot. As part of its sponsorship deal, Jones Soda is featured in track branding and in shout-outs by star commentators during the events. Jones Soda is also featured in promotions ahead of race days across the championship channels.

For Maisie Antoniello, vp-marketing at Jones Soda, the COVID-19 pandemic has forced her team to think moment by moment, rather than months out.

“We had in our plans for 2020 some pretty big events, which included going back to our guerrilla marketing roots and our heritage in skateboarding, so when it became obvious that things were not going to happen, we knew we had to pivot,” Antoniello says. “Esports was something we had looked into, and given our history in gaming, and knowing that everybody was going to be hunkering down and staying in, it felt like a good time to strike while the iron’s hot and see what happens.”

Torque Esports put the The Race All-Star Esports Battle together in 48 hours following the cancellation of the opening round of the FIA Formula 1 World Championship in Australia due to the pandemic. Its first sim race raked in more than one million views, a stat that was particularly attractive for Jones Soda, as was the involvement of well-known racecar drivers, like IndyCar’s Tony Kanaan and Formula 1’s Max Verstappen.

“We’ve worked really hard with Torque to ensure that Jones has great in-game integration, soup to nuts,” Antoniello says. “The other thing we’re learning is with motor sports, the lead up to race day is also important, so how do we integrate that into our own social channels and partner with them as they’re ramping up to race day. We’re figuring out how we can create more engagement and buzz to build momentum, too.” 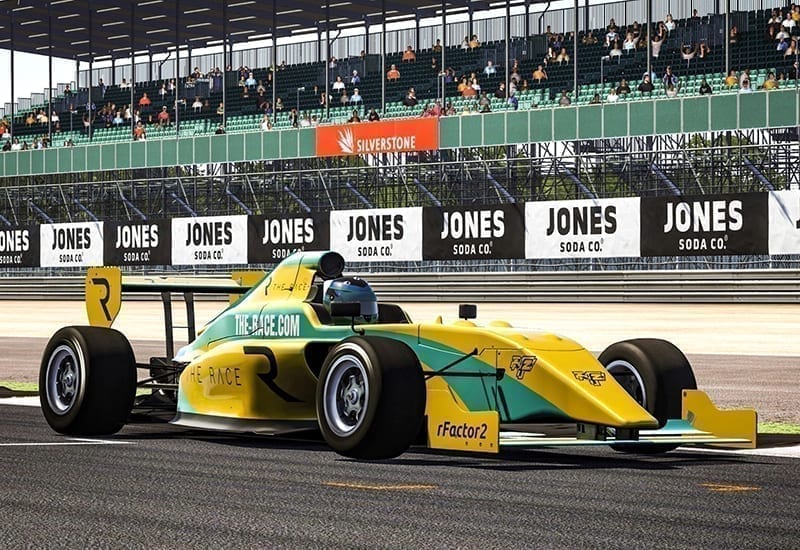 Like a traditional event sponsorship, Jones Soda works with Torque to structure the program ahead of each race, track progress, and analyze what worked and where to make adjustments for the next one.

“The blessing in this, and the opportunity in this, is you can learn as you go and you can shape the consumer experience and brand integration iteratively,” Antoniello says. “When you’re the sponsor, whether it’s virtual or not, you always want to come to a place where there is a true partnership, where the rising tide lifts all boats. And I think that holds true no matter what you’re doing. That spirit of partnership is important, especially in this virtual space, as well as constant communication, learning and improving.”

In addition to securing new avenues for consumer engagement, Jones Soda is working on relief efforts related to the pandemic. The brand expanded its custom label program, partnering with Artist Trust, a nonprofit organization, to support Washington State-based artists. Artists can send Jones Soda photo submissions of their artwork through the month of April, and for every submission the brand is giving a donation toward the Artist Trust, which is providing artists with cash grants and resources during the crisis. The photo with the most votes, as well as one chosen by the Jones team, will be featured on bottles. A portion of those proceeds will also go toward the organization’s efforts.

“With challenges come opportunities, and we’re figuring out how to use our brand and our platform to help touch people’s lives in a different way,” Antoniello says. “Being nimble and flexible is really important right now.”

The post Jones Soda Makes its Move into Esports with a Sim Racing Digital Sponsorship appeared first on Event Marketer.